– I am probably the only one writing about nationalism who doesn’t think it ugly, says Benedict Anderson. In 1983 the professor at Cornell University, New York, wrote one of the most read books ever on nationalism, “Imagined Communities: Reflections on the Origin and Spread of Nationalism”. At the international literature festival Kapittel (Chapter) in Stavanger he had a good half-hour free for an interview. 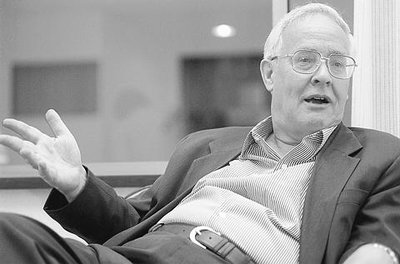 One of the main points in Anderson’s book is that nations are imagined communities. Imagined because never – not even in the smallest nations – can one know all the members of the nation. A nation is, in a manner, a Utopian community. Anderson attaches importance to modern communication, by way of books, the telephone and more recently radio and TV, as a condition for the existence of a national community. How could we otherwise even know about each other?

The nation was the main theme for the literature and free speech festival, Kapittel 05. The questions which were posed in the debate were: What does it mean to belong to a nation? In the 21st Century do we still need a national state with which to identify ? How deeply ingrained in us is the feeling of nationality, patriotism, chauvinism and nationalism?

In a debate chaired by Thomas Hylland Eriksen, Benedict Anderson spoke about new forms of nationalism. Despite all the talk of transnationalism and fluid identity, nationalism is in the best of health.

Newer examples of nationalism are the long-distance nationalisms of migrants: Jews in the USA fighting for a state in the Middle East, or Tamils in Norway working for their own state in Sri Lanka. Some of the most ardent Sikh nationalist are situated in Australia and Canada – thanks to the Internet and cheap airline tickets.

– Without shame no nationalism

A key word in his understanding of nationalism is shame.

– If you feel no shame for your country you cannot be a nationalist, he says. And, shame can be contagious.

Benedict Anderson himself has – like many other researchers of nationalism – a mixed background. Born to an English mother and Irish father, he grew up in China, studied in England and the USA, and did research in Indonesia and Thailand. Since the early 1970s he has lived mainly in the USA. To go a little deeper in to the theme “shame” it might be relevant to ask him which country he feels shame for.

It is a question that he clearly has not thought much about. He answers only after taking some time to think.

– Well, that’s certainly changed during my life, he begins.

– When I was young I was ashamed of England. I first became politically engaged when I was 20 and a student at Cambridge University. I witnessed how the arrogant upper class lads beat up Sri Lankan students demonstrating against Britain’s role in the Suez Crisis. It made me ashamed. To think that an Englishman could behave like that!

– But today I no longer have such an attachment to England. I do have a certain – but not strong – attachment to the USA, and an attachment to places I have studied in Southeast Asia. I am ashamed about what is going on in southern Thailand. I have a long relationship with Indonesia, but I have stopped feeling shame for that country.

– So you are a little nationalistic – despite the revealing books you have written about nationalism?

– Yes, absolutely. I must be the only one writing about nationalism who doesn’t think it ugly. If you think about researchers such as Gellner and Hobsbawm, they have quite a hostile attitude to nationalism. I actually think that nationalism can be an attractive ideology. I like its Utopian elements.

– Many think of nationalism as something big and serious. Michael Billig has written a good and funny book called “Banal Nationalism”. He points out that nationalism is present every day, it’s in the air we breath: We have national weather, national time, national news, national foods etc. etc.

In Anderson’s opinion nationalism even contributes to a better society. It makes people behave better because they are members of a society:

– You follow the laws because they are your laws – not always, because you perhaps cheat on your tax forms, but normally you do. Nationalism encourages good behaviour. For Billig nationalism is like the human body. Sometimes it is healthy, but occasionally it might become sick, feverous and do ill things. But normal body temperature is not 41 C but 36.5 C.

Anderson’s book is one of the most widely read books on nationalism. It was first published in 1983

– You wrote Imagined Communities in the 1980s. What would you have written in the preface of – let’s say a new edition in 2006?

– Well, it’s a book I wrote when I was 45. That’s nearly 25 years ago. I have a relationship to that book as to a daughter who has grown up and run off with a bus driver: I see her occasionally but, really, she has gone her own merry way. I can wish her good luck, but now she belongs with someone else. What would I change in the book? Well, should I try to change my daughter?

– What has changed since then?

– What is new is, among other things, the American dominance and the new liberalism, and long-distance nationalism. In 1998 I published a collection of essays in the book “The spectre of comparisons : nationalism, Southeast Asia, and the world”. Three or four of the texts build upon “Imagined Communities” and address the reactions the book received. I tried to come up with someone new to say about nationalism and what is taking place in society.

– But isn’t nationalism outdated in our global society? More and more people live a transnational life?

– That’s exactly what I don’t believe. Think about long-distance nationalism, email/Internet nationalism. In my lecture I referred to exiled Argentinians’ websites. These are extremely nationalistic and are purely about Argentina. Think of the Norwegian schools in Spain, it’s crazy: The only reason for their existence is that people fear that their children will stop being Norwegian. The Norwegian schools take Norway to Spain. That is the best evidence available that nationalism has gone mobile.

– I haven’t met many cosmopolitans in my life, perhaps no more than five, he adds.

When nationalism “clashes” with the internet and mobile technologies

– Zygmunt Bauman talks of fluid identity and the like?

– Yesterday, I heard an interesting lecture by Etienne Balibar. He said that today fewer French understand German than when he was young. A German colleague told me something similar: previously many more Germans spoke French than is the case today. So, here you have so-called cosmopolitan Europeans who to a continually diminishing degree understand each others languages, says Anderson and begins to chuckle, pleased with what he has just said.

To underline his point that we are not so much more cosmopolitan then before, he tells me of the time when there were no such things as passports (“a creation of the 1900s”), and that previously there were many “foreigners” in the parliaments of France, Germany etc., and that previous waves of migration into France did not provoke the paranoia we see today.

The history of nationalism holds many surprises and coincidences. One thing that fascinates Benedict Anderson the most is how nationalism evolves along with other developments in society. Right now nationalism “clashes” with the Internet and mobile technologies. Previously it “clashed” with the women’s movement. Women’s role in the evolution of nationalism is a completely ignored theme, he tells me:

– My books give the impression that there don’t exist any women in the world. I have heard and read of women’s role in nationalism, but as yet I haven’t found a way of writing about it, he admits.

Anderson begins to talk about one of his students who has found “fantastic documents”. They show that women were the energy behind the establishment of dual citizenship:

– In 1919 women in the USA became enfranchised, and could own land. They became citizens in a manner that they previously had never been. Before long the question arose of what would happen when a woman married a man from another nation, for now she would not be subordinate to her husband. The League of Nations eventually decided that the best solution would be that these women should have dual citizenship. At first, this was just a special exception for women, but as time went by men also wanted dual citizenship, and now in many countries it’s possible to have two passports.

– And I began to become interested in the question, “How do people think and feel about this? How does it feel to have two (legal) passports? What conceptions do they have of loyalty? This is an unstudied area! Think about a Norwegian woman married to an Argentinian. The children are pressured: They love their parents and wish to be both, but they can’t.

– Is this not an artificial problem? It is made a problem only because some people cannot think it natural to have attachments to more than one country?

– Sure. But the problems begin with the children, when they begin to go to school and the other kids make jokes about Argentina.

– I had an experience I will never forget. Many years ago I was supervisor to a black student who, as time went by, I developed a good relationship with. One day he came to my office and said he wished to tell me something that he had not told anyone before. At first I thought – he’s sure to tell me he is homosexual, but I was wrong. He said that his mother is white! At the university you are either black or you are white. His friends were black and he was unsure what would happen if they were to find out that his mother was white. The first time he allowed his mother to visit the campus was for the graduation ceremony, when he was finished. I was quite shocked that he had to hide this for so many years.

– That says a lot about American society…

… And it gives us an idea of what it’s like to disown one of our parents.

– A few last words to Norwegians sitting at their computer screens?

– It sounds perhaps too sentimental, but I saw, here in Stavanger, a black boy playing with other Norwegian children. I was so happy. Don’t break his heart!

Interview: Lorenz Khazaleh, translated by Matthew Whiting; originally written for the University of Oslo, published 15.12.2005 at culcom.uio.no (no longer available there)